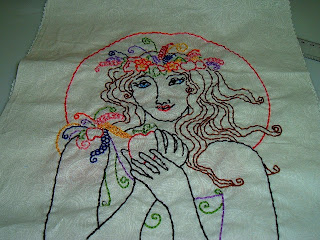 Okay, so it has been a week or two since I have had a chance to sit down and blog. It seems like I am working all the time (midnight to 8 a.m.) at a group home these days. That is my time to do some stitching as there is no computer to play on and I have to be up checking on things every 30 to 45 minutes. Embroidery is something easy to lay down and pick up again. 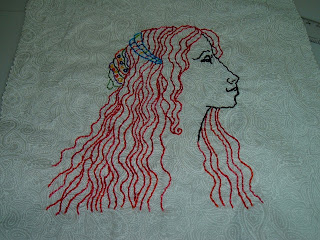 I am thinking of making a wall hanging banner that is quilted or possibly some pillows.

I liked the "Mother Nature" pattern so much I have already stitched up a second one in different colors. I am going for bright and Spring colors. Who knows, I may have to explore different color choices on another one and make her hair green or something unusual. 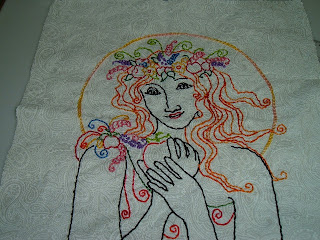 Got to run as I am pulling an extra overnight for someone at the girl's home. Thank goodness the shift I was scheduled for tomorrow night doesn't need me -- I love text messaging!!! 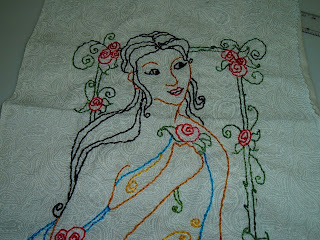 Posted by WonderlandShoppe at 10:03 PM No comments: Links to this post

Pick Me Up Winter Bouquet 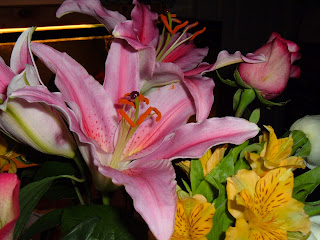 Well, I finally did it! I broke down and visited a new floral shop on Central Avenue in Great Falls, Montana. When the snow keeps persisting on these extremely hard winters, I just have to have some signs of life and growth and color infused in my world to keep me going.

It was fun to be able to pick out what I wanted in my bouquet. I also let my husband do the selecting of the flowers. I think we did a really good collaboration!

Now they sit on my dining table and even the kids are happy and talking of them. My sweet daughter pointed to the inside of the lily and told her younger brother, that stuff is called "pollen". Thank goodness she didn't go into the discussion of bees as he has a major worry about that subject.

I will just be glad to get to the bee season this year, but until then another trip to the flower shop may be in order. Just saw an updated weather report -- another winter storm on the way for us and we are at -18 degrees as I write this!
Posted by WonderlandShoppe at 9:53 PM No comments: Links to this post

What Is With This Weather? 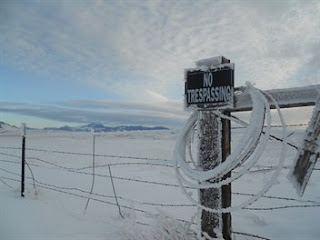 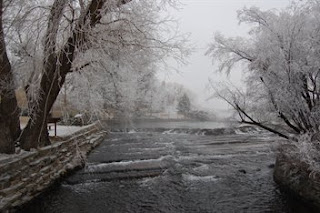 For several weekends now I have been trying to travel by roadways here in Montana from one city -- Great Falls -- to another -- Kalispell. 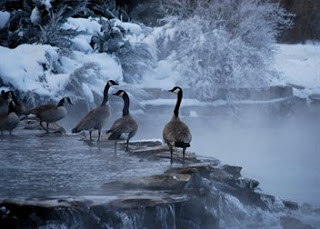 The first reason for not accomplishing my goal was SNOW! Go figure. It is after all in the middle of winter and I do find myself watching more and more of the weather channel for parts of this continent where I have friends and relatives nesting. Again, what is with this weather?! 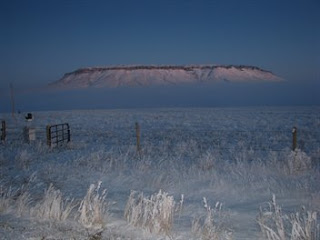 Now my area is in the upper 40's, but the second reason for not accomplishing my goal or travel destination is WIND! After going over half the distance (almost 2 hours of driving one way), in winds up to 50 mph, my van reached a town called Browning, MT. The winds picked up to 70+ mph and the driver's door was literally moving in and out (like it was breathing) because the wind was so bad. 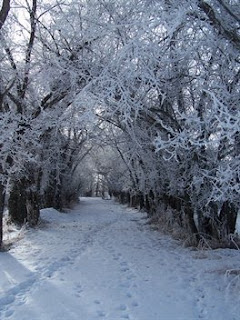 Then I get to my turn off for the last leg of the journey to find a Montana Department of Roads utility truck barricading the road -- Highway 2. We were defeated and by then the children in the middle and back seats were calling for lunch. So a turn around was made and travel back 100 miles down the road found us at Shelby, Montana in a Chinese restaurant as an alternate adventure. 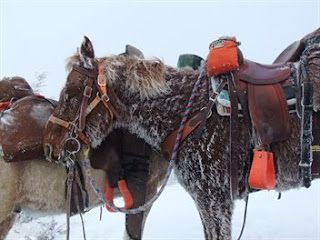 The food was good and everyone satisfied to make the additional 85 miles home to Great Falls, Montana. 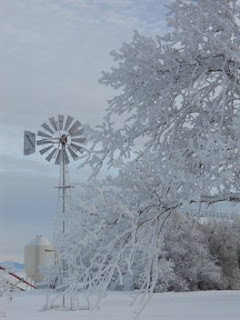 Phone calls have been made and relatives have been located in Kalispell since I have arrived home. They know we made an effort and I hope they know we are thinking about them. Another endeavor will be made in the future for this goal of visiting in Kalispell, but now I know to not even start if SNOW and now high WINDS are mentioned in the weather forecast. 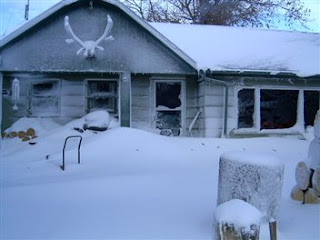 Hope you like the pictures in this posting. They are from our local paper submissions from readers with the topic of Montana in Winter. I picked these, because I thought they were the best! 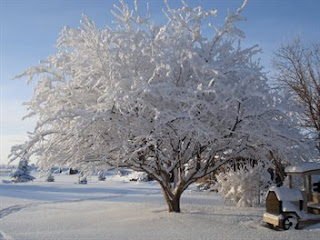 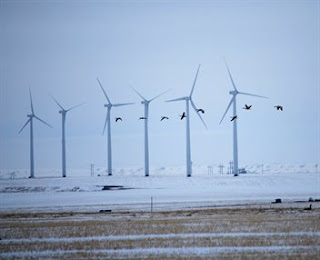 Posted by WonderlandShoppe at 5:51 PM No comments: Links to this post 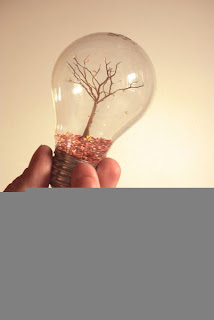 Can anything be better than roses or chocolates? Well, in my way of thinking -- light!!! My husband made it his weekend project to bring illumination into my life.

Several months ago (when the Christmas tree went up), I began rearranging our living space. Wanting a more individualized (mainly private) space to sew and create, I moved most of my crafting items to a bedroom not in use currently. The only problem I started having was getting tired when working in the evening. I had put a small table lamp on the sewing machine table and thought that would be sufficient for me.

This however proved to be wrong and I mentioned how I needed to purchase a standing lamp for the room. (It only had a ceiling fan and two windows high on the walls). Come Saturday morning before I was up and moving around, my husband had already been to the hardware store and purchased two suspended light fixtures. With a couple screws in the ceiling for each fixture and the cords plugged into the walls, I am all set. Didn't know how much I needed light, until it was given to me. Thanks, Fred.

So yes, light is better than roses or chocolates, but I may just splurge and get him some!!!

Here are some nine-patch log cabins I had been sewing together in the dark. I really like all the colors, now that I can see them. 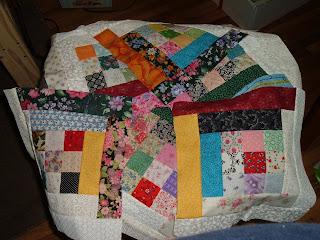 Also, been stitching away for a couple weeks at my new 3rd shift position at the youth home. 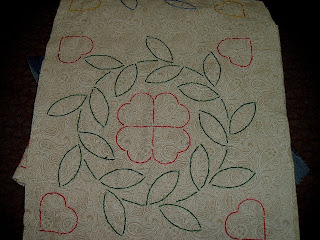 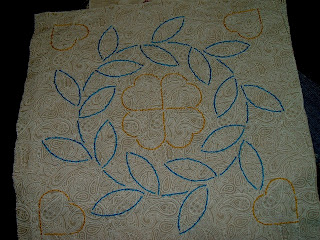 Posted by WonderlandShoppe at 6:40 PM No comments: Links to this post

Under the Sea Colorful Creatures 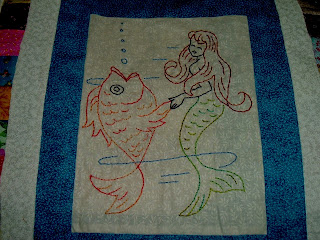 For so many months in 2010 I was happily stitching away on some drawings I found on a blog once a month. Here are the end results to show as I have been putting them together in a quilt top. 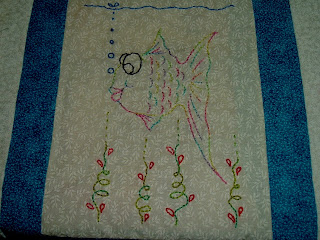 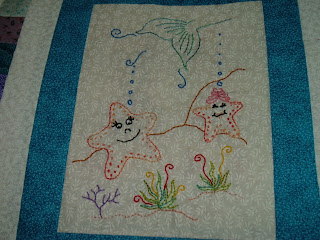 I only have two final borders to go and a lovely twin size quilt or throw will be ready for sandwiching together as a finished piece. 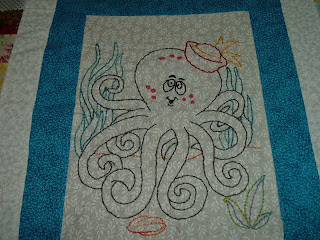 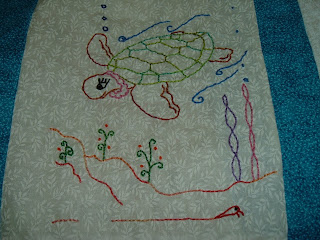 One of the blocks I chose came from an old vintage pattern (the fish dancing with the mermaid). I also decided I wanted an octopus to go along with this theme and found a coloring page online to use as a pattern. They both fit so well here. 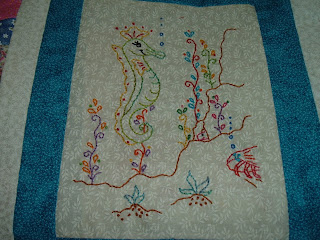 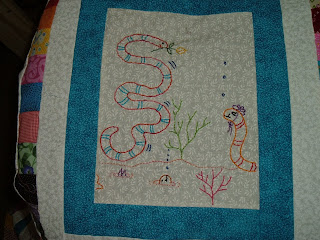 I am excited to have this one finally completed!!!
Posted by WonderlandShoppe at 6:22 PM No comments: Links to this post 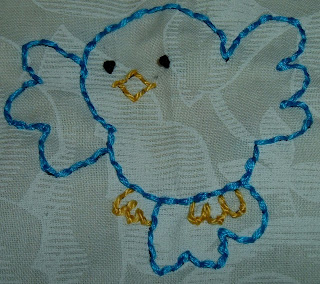 Oh, how I would love to hear the birds chirp right now!

Winter is seeming like forever here in Montana these days. Plugging in the van to ensure a start when turning the ignition key, brushing the snow off the windows, frozen ice on the windshield wiper blades, and watching every step you take. Then, just like out of no where down you go whether it be forwards or backwards . . . an instant feeling of defeat. 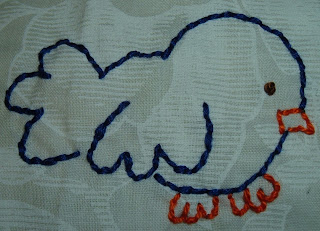 Since the birdies don't seem to be in the near future, I decided to stitch some to work on a colorful quilt top. Maybe I will get it put together by the time green grass and green leaves and sunshine appear around here. 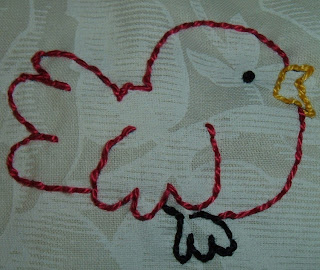 Until then, I may just have to go and purchase some fresh cut flowers for the dining table -- those always perk me up!! Hope you will do the same if you are beginning to feel the way I am these days.
Posted by WonderlandShoppe at 6:11 PM No comments: Links to this post